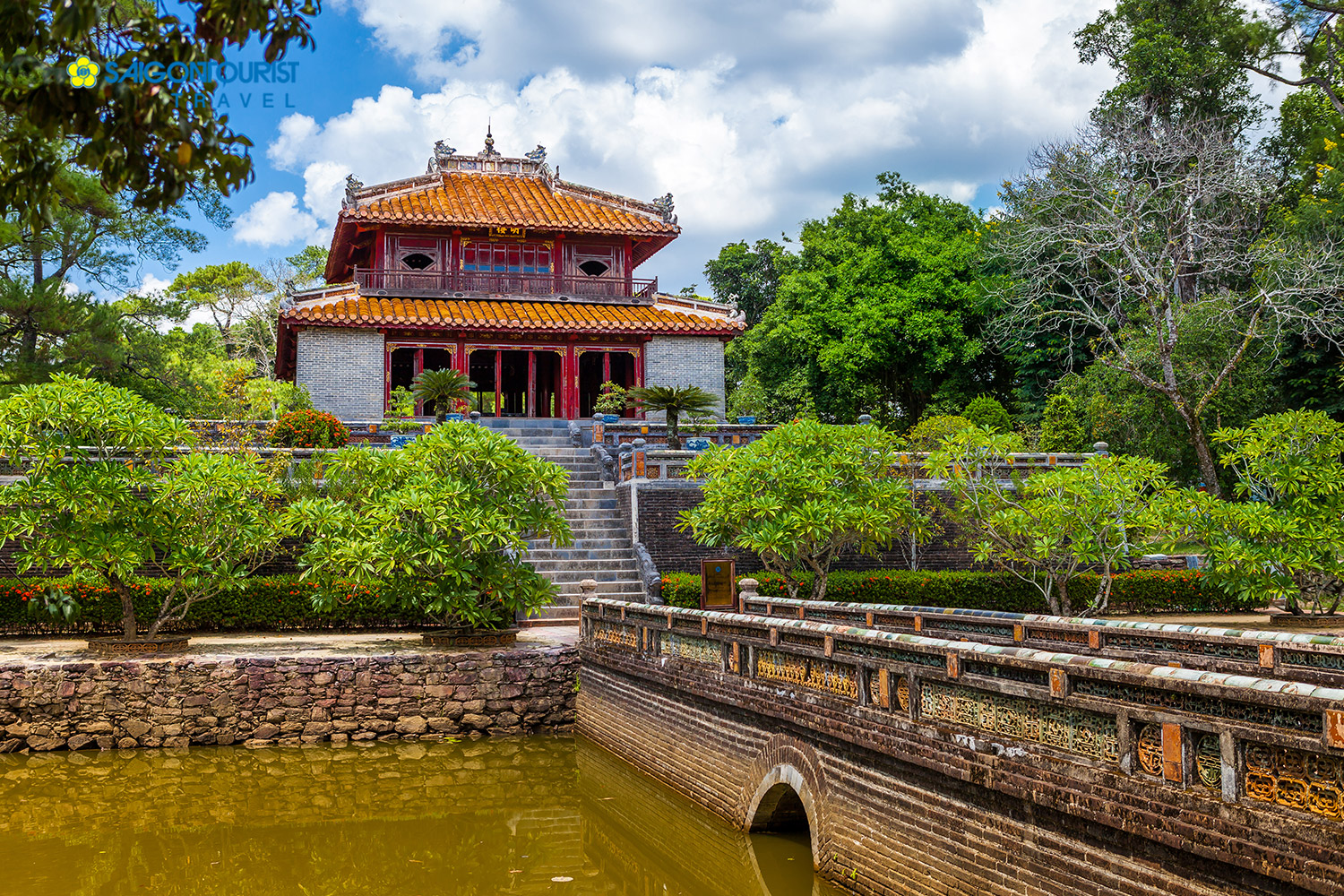 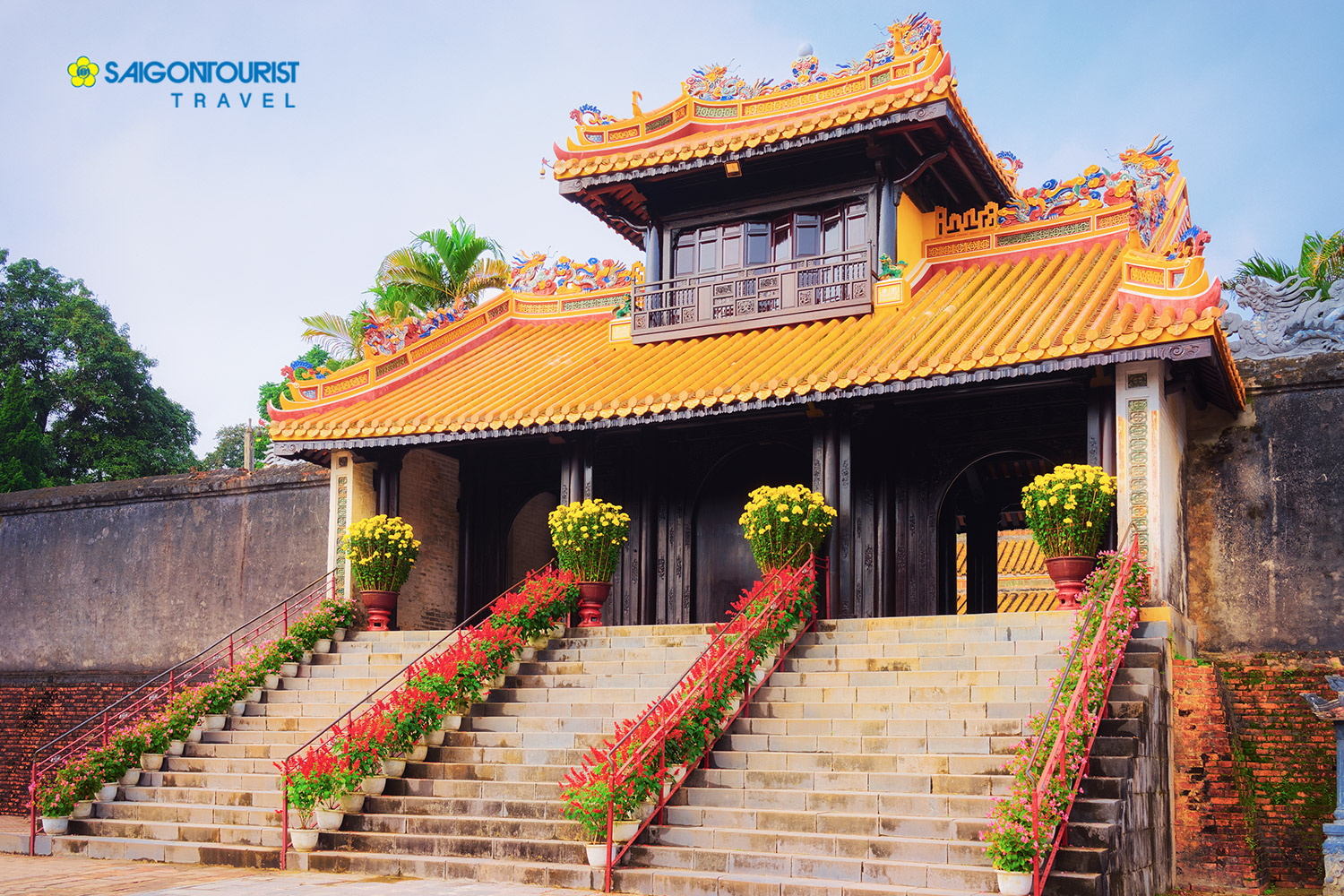 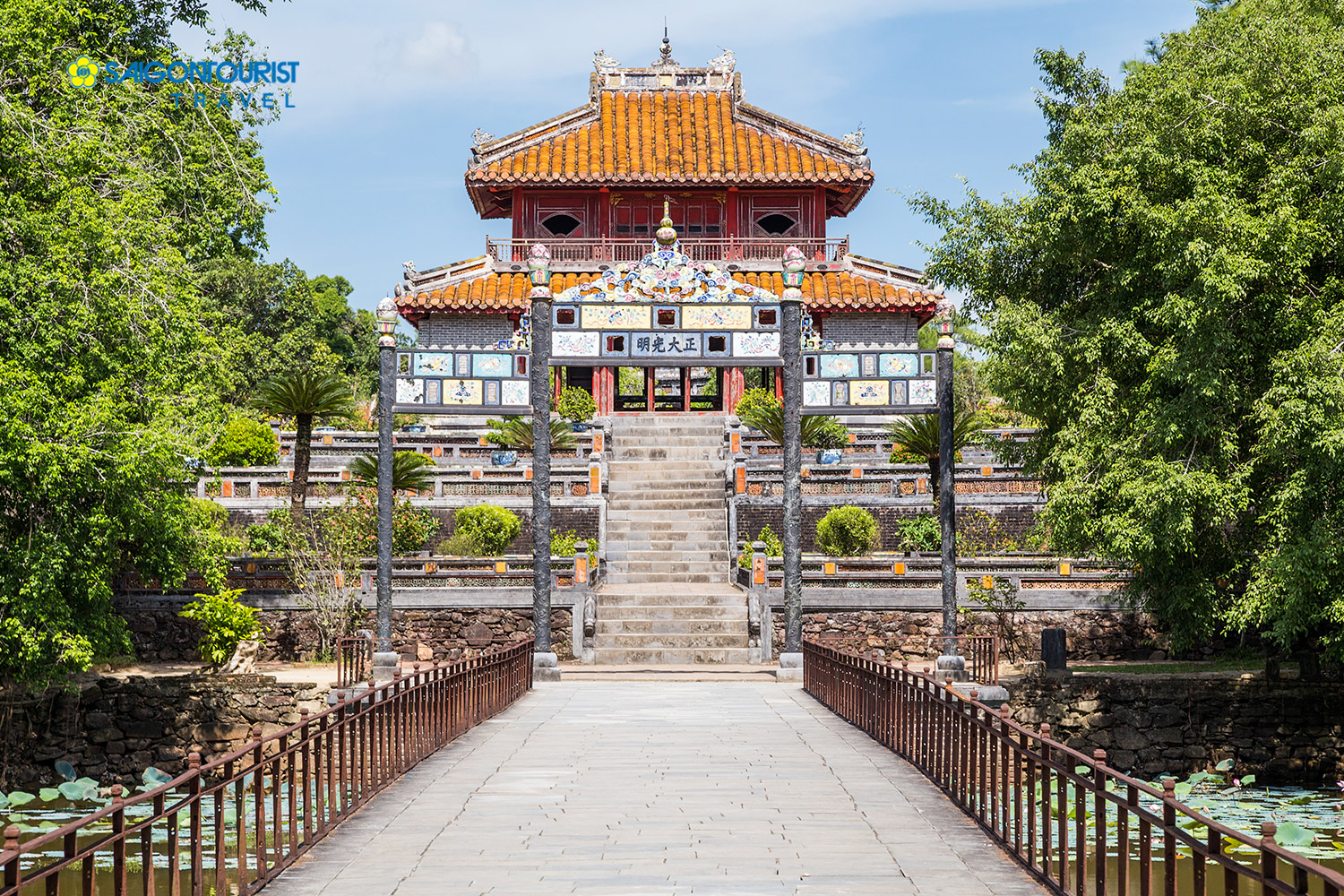 Tomb of Minh Mang is located 12km from Hue, on Cam Ke mount, near Bang Lang fork, on the west bank of the Perfume River.

In September 1840, the construction of the tomb began. In January 1841, while the work was implemented, Minh Mang was sick and passed away. Emperor Thieu Tri, his successor to the throne, continued this task according to his father's plans. Emperor Minh Mang's corpse was buried in Buu Thanh on August 20th, 1841. The construction was fully completed in 1843. The constructions are distributed into three main parallel axes, of which Than Dao path in the centre.

Dai Hong Mon: The main gate to enter the tomb. The gate presents three paths with 24 heaving roofs covered with beautiful decorations. The gate was opened only once to bring the Emperor's coffin to the tomb and had been tightly closed since then. Visitors have to use the two side-gates Ta Hong Mon (Left Gate) and Huu Hong Mon (Right Gate).

Bi Dinh: Behind Dai Hong Mon (big gate) is the Honour Courtyard with its two rows of mandarins, elephants and horses' statues. Bi Dinh (Stele Pavilion) is on Mount Phung Than. Inside is the stele "Thanh Duc Than Cong", inscribed with the Emperor's biography and merits written by his son Thieu Tri.

The temple area:
The Salutation Court is divided into four steps - The Hien Duc Mon (gate) leads to the worship place. In the centre is Sung An Temple surrounded by Ta, Huu Phoi Dien (Left, Right Temples) in the front and Ta, Huu Tung Phong (Left, Right Rooms) in the back. The Emperor and Queen Ta Thien Nhan are worshipped in Sung An Temple. Then, Hoang Trach Mon (gate) leads to the Bright Pavilion (Minh Lau), built on Tam Tai Mount. It is a square pavilion with two storeys and eight roofs. On both sides of Minh Lau, two obelisks stand on the hills. In the back of Minh Lau are two flower gardens designed as the character "Longevity".

Other attractions in: Hue 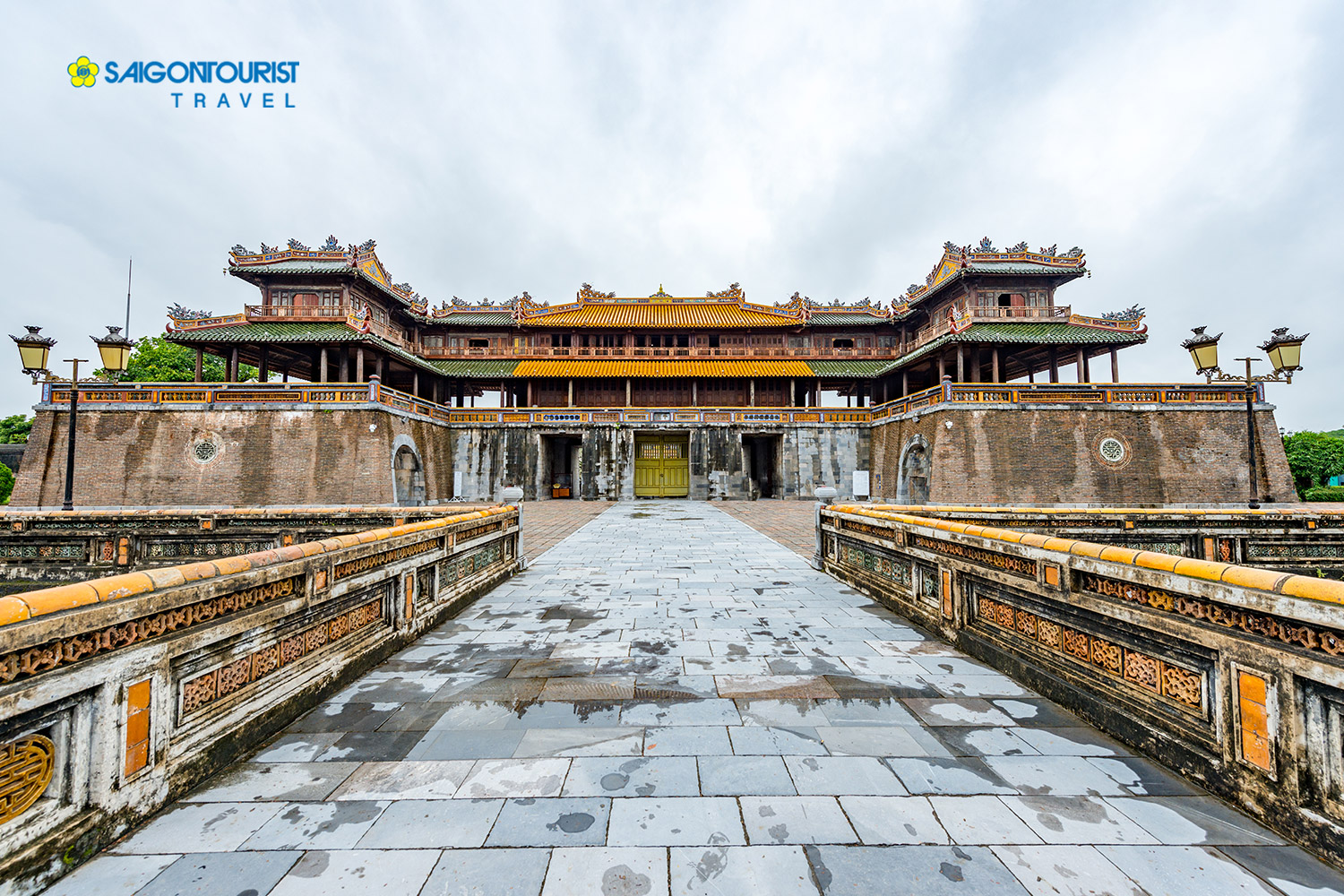 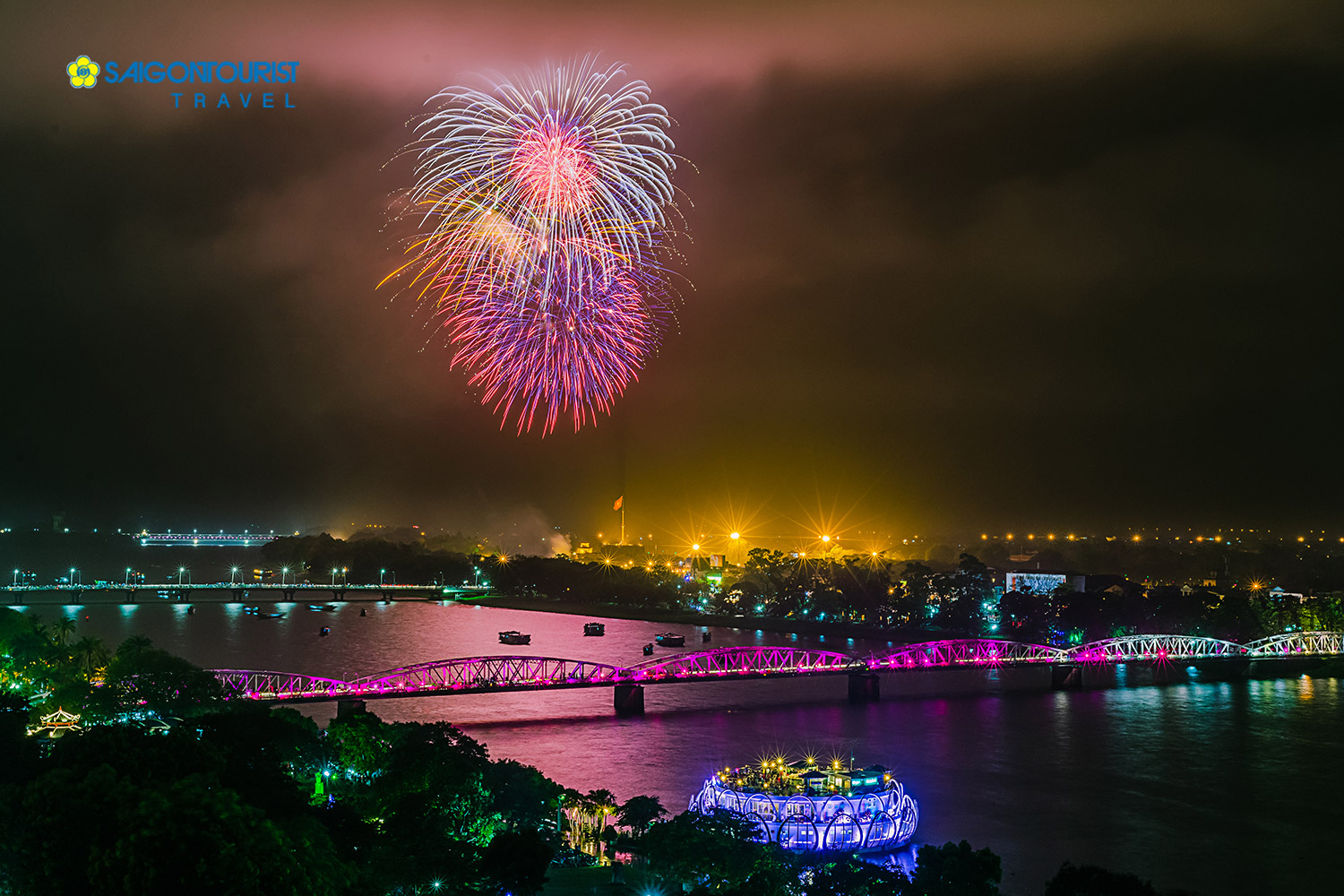